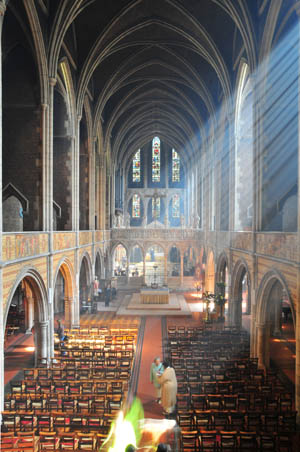 In a famous Polish religious capital city of Czestochowa is held one of the biggest musical events of the year - the 13th International Festival of Sacred Music.

International Festival of Sacred Music «GAUDE MATER», first organized in 1991 and became from that moment one of the biggest music events, today is the only festival of church music of such a large scale in Poland. The festival also hosts a competition of young composers «MUSICA SACRA" YOUNG COMPOSERS ».

The uniqueness of the leading European Festival of Sacred Music «GAUDE MATER» lies in the fact that, thanks to the music of different faiths gathered under one roof there are many representatives of a wide variety of nationalities and religions.

The festival offers visitors the opportunity to hear a very wide range of church music from the choral concerts to the famous cantatas and oratorios. The audience can enjoy the music not only a variety of genres, but also of different religions, including Catholicism, Orthodoxy, Protestantism, Judaism, Buddhism, Islam and religion of ancient South American civilizations.

This year's festival will gather in Poland extremely interesting ensembles, many of which will be a huge and extremely pleasant surprise for the audience. Among the celebrities of the Festival of Sacred Music «GAUDE MATER» were such musicians as the Moscow Choral Academy (Russia), Schola Gregoriana Holmiae (Sweden), Orchestra da Camera Botticelli (Italy), Boys' and Men's Choir of the Church of St. Thomas in Leipzig (Germany) African-American singers of the choir St. Sabina Choir (USA), chazan of Jewish synagogue Joseph Malovany, Tibetan monks of the monastery in Gyuto (India), the chorus of the Coptic Church (Egypt), as well as the ensemble of Islamic religious chants Religious Song Ensemble (Egypt).

Premiere concerts have become an integral tradition of the Polish Festival of Sacred Music «GAUDE MATER». At this festival will be featured the world premiere works of such masters as Henryk Mikolaj Gorecki, Roman Maciejewski and Juliusz Luciuk. Also the festival will host a series of academic seminars, the lecturers of which will be Marcin Tadeusz Lukaszewski, Marek Dyczewski, and Professor Tadeusz Przybylski.

Closing of the Festival of Sacred Music is scheduled on May 6.