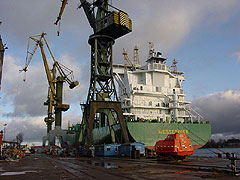 After the adoption of democracy the Polish economy changed dramatically. After the privatization process the country attracted large investors and therefore Polish economy took the appropriate place at the European market. Also, investments created many opportunities for the realization of large economic projects in the country. But not all sectors are equally well developed.

In the Polish economy, as in any other, there are some drawbacks. The largest is the high unemployment (2008 - 6.5%).

Poland is industrial-agrarian country. Gross national income per capita is about 16 600 dollars a year. In 2007, the GDP of Poland was amounted of 632 billion dollars. Poland's external debt at the end of III quarter of 2007 was amounted of 204, 967 billion. As the majority of countries, Poland is largely affected by the global financial crisis; the inflation has increased and GDP growth rates have slowed as well as incomes had decreased.

Poland is relatively rich in mineral resources. Prevails the producing of coal and brown coal, natural gas, sulfur (one of the first places in the world), salt, copper ore, zinc, lead, and wood.
In the manufacturing industry of Poland dominate: machinery, ferrous and nonferrous metallurgy, chemical, textile and other industries.
The basis of the Polish energy sector is coal. Most of power stations work on coal.